;
According to my emails, on the 12th of September, 2016 – I emailed John (Culprate) telling him I’d finished this Tentacle remix (of which I’d asked him for stems for a month or so earlier, because I loved the tune & just wanted to Mr. Bill’ify it) – and so there it laid, for around a year (slightly more actually) until now! Many talks happened on how we wanted to release this one, and in the end we saw a home for it on the Night Owl Collective’s newest compilation “Feel Trip Vol 3”. Upon making this decision I asked John if he’d be OK with me releasing the project file, and being the nice guy he is, he agreed. So here you have it! Enjoy 😀

Buy Now for $4.99
Hardcore Abletoneers: click here to go download it
Notes
There’s a Pro-Q on “Channel 28” which is the “Synths 1 (Pianos)” group that I couldn’t freeze, as you cannot freeze groups. It is basically cutting 5dB from 200hz with a Q of 1.6, and boosting 11k by 2.5dB with a Q of 1 if you feel the need to recreate it using Live’s native EQ Eight or something, however I figured as far as educational purposes (or even remix purposes) go, it’s not that important. There’s a Pro-Q on “Channel 63” which is the “Vocals (Bill + Culprate Vox)” group which is unfreezable unfortunately. It does only turn on during “Vox Drop 1” & “Piano Outro” though, so it won’t effect the whole tune + it’s just making things a little brighter & cutting some low frequencies at 185hz. For the sake of education or remixes, this isn’t too vital. On “Channel 80” you’ll see a clip called “Culprate Vox Bus Render”, and note “Channel 79” is muted. This was due to an instance of “Uhbik-A” & “Pro-Q” being on this channel & the monitor state set to “In”, rendering it unfreezable. I felt this was the best solution. Feel free to mute Channel 80 & unmute Channel 79 if you have these plug-ins. “Return Channel A – Reverb” is unfreezable (as all return tracks are), and has an instance of “Valhalla Room” & “Pro-Q” on it, I’ve monitored the tune with the return channel both engaged & muted, and haven’t noticed a huge difference, so you should be OK without this. The master is unfreezable (as master channels always are), and on this master channel there is a Pro Q-2 & Pro-L doing some basic mastering stuff. The EQ is just brigtening & coloring different elements of the spectrum mainly & the Pro-L is boosting the gain by about 15dB. You could try & re-create this with Live’s native EQ Eight & Limiter, or you could just turn your speakers up & hear the raw, un-mastered, dynamic version (which I personally prefer).
Plug-ins Used (Frozen)
FabFilter – Pro-Q 2 Izotope – Alloy 2 Cakewalk – Z3TA+ 2 Valhalla DSP – Valhalla Room Izotope – Trash 2 u-he – Zebra 2 Native Instruments – Kontakt 5 Fine Cut Bodies – La Petite Excite u-he – Uhbik 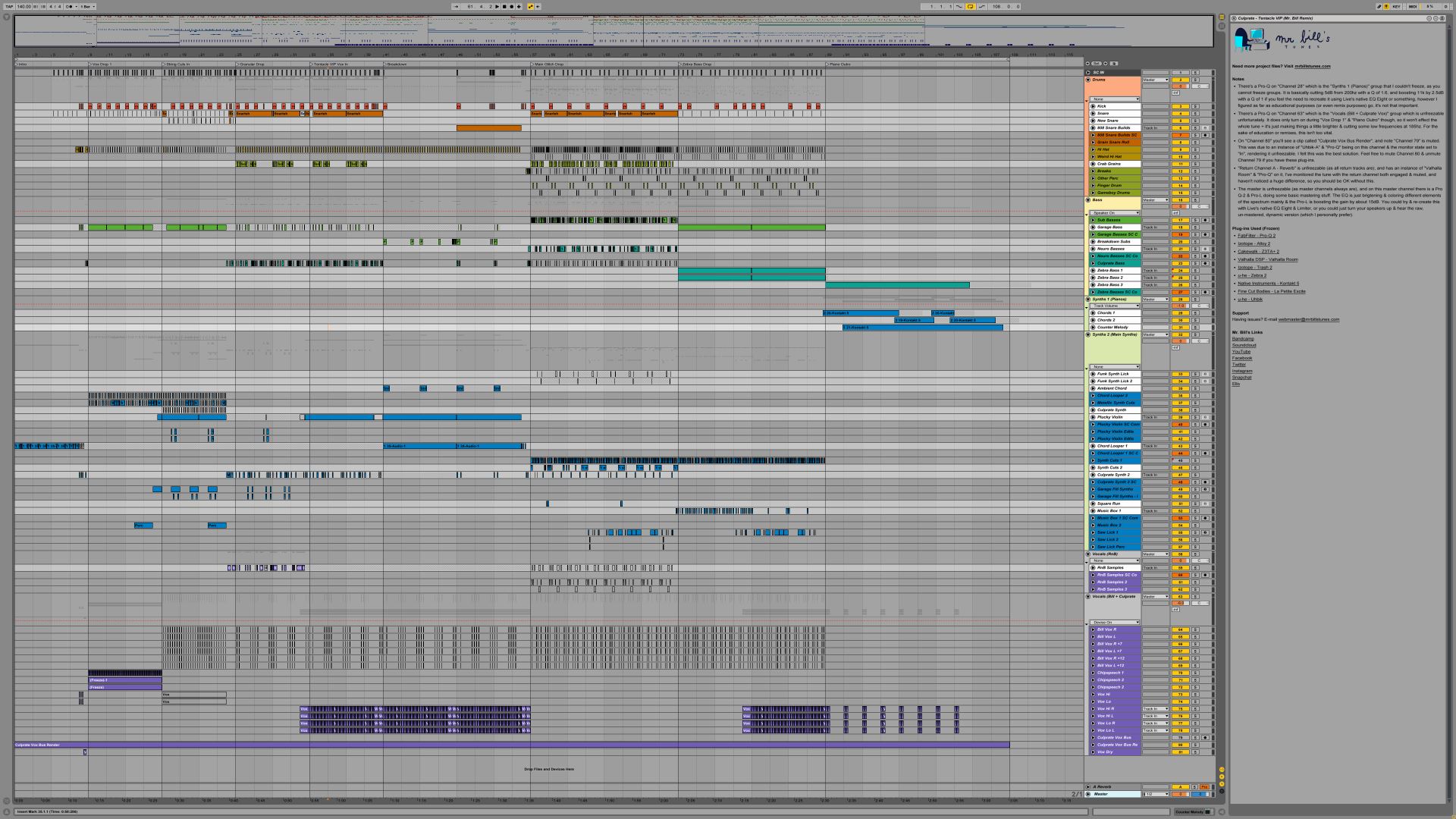 For every dollar spent on the site, you will be rewarded Mr. Bill Bucks that are redeemable on the site.

The value equals a perpetual 5% “cash back” style rewards program.

To learn more, click the button below to open a new tab with the FAQ section about Mr. Bill Bucks.

“Hardcore Abletoneer Downloads” are direct download links to download digital products right from the page rather than adding to cart and checking out.

All digital files are available at no extra cost to active Hardcore Abletoneers.

You can sign up for as little as $12.50 per month on the yearly plan ($20/month on monthly) which gives you instant access to EVERYTHING.